The private gardens surrounding Firle Place cover nearly 300 acres, 190 of which are parkland and are maintained by a team of full-time gardeners. Please note, house admission does not include private areas of the gardens and grounds. Please contact the Estate Office for more information to the days of the year these are open to the public.

The formal gardens start with the parterre at the front entrance and lead to the the North Borders. These form part of the late 19th Century garden, which is planted with mixed borders of shrubs and herbaceous perennials.

The centrepiece of the lawns is a majestic Victorian fountain, designed by Austin Sealy in 1872.

The path leads past a giant Holm oak to the Cherry Walk, a hornbeam hedge surrounding an avenue of cherry trees. From here the view looks out to the 1½ acre Long Pond. Originally, this acted as a lake at the bottom of an intricate canal system linking Firle Place to the River Ouse.

The canals have long since disappeared but the Long Pond is still a feature of the garden.

To the south of the house, 20 acres of young woodland and sloping lawn make up ‘The Pleasure Grounds’. These are part of Lord Gage’s private garden, and are open to the public twice a year in April and September in aid of charity. ‘Pleasure Ground’ is an 18th Century term meaning an ‘area of cultivated lawns and ornamental planting and architecture designed for ‘traversing on foot’‘.

The private walled garden produces fruits and flowers for the house and holds a very interesting specimen; one of the original greengage trees, introduced to the British Isles by the Gage family in 1724.

The Grounds at Firle Place

The earliest known reference to Firle Park is in a court role dating back to 1333, however like the majority of English parks which are today considered important, Firle developed its essential character during the 18th and 19th centuries.

The park was progressively enlarged over the years by successive acquisitions of land during periods of prosperity when members of the Gage family were in prominent service of the crown. In the late Georgian period much of the outer part of the park was let to tenants or owned by freeholders and used for agriculture. This is clearly shown in Marchant’s map of 1775 which depicts a fence separating the agricultural land from the ornamental park. Later maps show that this agricultural land had been bought by the Gage family and added to the park . A series of stew ponds leading to a larger decoy pond near the northern boundary were then created for fishing. Sheep farming constituted the main industry in the park throughout the centuries and still continues to this day.

Since the 16th century, when it served principally as a deer park, Firle park has hosted all manner of country sports including shooting, coursing and notably ‘Tilting at the Quintain’. This was a revival of chivalric ceremony and lancing competitions. Many of the games included training for jousting where a competitor would attempt to strike a mannequin and sometimes a seated armoured knight with a lance, sword or weapon.

The Times (August 7, 1827) describes some of the activities that occurred:

“Viscount and Viscountess Gage gave a grand fete on Friday (August 3, 1827) at their seat at Firle Place, Sussex, to about a hundred and sixty of the nobility and gentry, at which the ancient game of quintain was revived. The sports commenced by gentlemen riding with light spiked staves at rings and apples suspended by a string, after which they changed their weapons to stout poles, and attacked the two quintains, which consisted of logs of wood fashioned to resemble the head and body of a man, and set upright upon a high bench, on which they were kept by a chain passing through the platform, and having a weight suspended to it, so that if the log was ever struck full and forcibly the figure resumed its seat.’’

A painting of ‘Tilting at the Quintain’’ can be seen in the Blue Corridor at Firle Place.

The Pleasure Grounds’ historic function as a place of recreation near the house would always have offered a contrast with the relative public openness of the park. It still contains evidence of a layout earlier than that of the park itself and is thought to have been gardened since the earliest days of residence at Firle Place. Marchant’s map of the area shows that the grounds are laid out in a series of terraces, some of which contain evidence of earlier walls as well as parallel walks. Italian gardens, which were predominantly terraced, were much visited by young men on ‘The Grand Tour’ and were a major influence on the flourishing of landscape design in 18th century England. This is why the current layout of the Pleasure Grounds are thought to have been inspired by the 2nd Viscount’s ‘Grand Tour’ and travels to Italy circa 1840.

Sunken paths are visible inside the eastern and western boundaries of the Pleasure Grounds and are thought to form part of a series of walks around the garden and park. These would have been used by guests who were able to stroll through them in relative privacy after lunch at Firle Place.

An Icehouse was built into the north facing slope of the Pleasure Grounds in the late 19th century and is almost entirely subterranean. This structure has recently been restored and was used to store ice (insulated with straw) throughout the year. This was not only used to store food but also to cool drinks in the summer and even allow ice cream and sorbets to be prepared in the house. The Icehouse at Firle is unusually sophisticated in that it employs a 3 metre long brick loading shoot which opened into the vault from an access road above and allowed ice to be unloaded directly off the cart and into the chamber.

The terraced gardens on the north side of the house were built by the 5th Viscount in the 19th century on the site of an earlier canal. The West Firle Tithe Map shows that this canal had been drained and filled in by 1843 at roughly the same time as a major programme of work was untaken on the Long Pond. The canal was positioned a few metres north of the house and it is thought that the family had decided to distance the house from water and its attendant dampness.

In his ‘Memories of Firle” the 6th Viscount wrote the following about a visit by Winston Churchill in the 1930’s:

‘Mr Churchill’s reputation had not by then risen to the legendary heights that now accords to him, but at Firle he provided evidence of his power of big-scale thinking, albeit in a limited sphere. For as he went round the house he considered for a moment or two the view from the terrace, and then told me that my ‘lake’, as he described it, was in danger of being called a pond. ‘You should enlarge it by taking it up to the terrace. It is quite simple. All you need to do is lay a light railway..’  Anyone standing on the terrace near the fountain can see for themselves what the Churchill plan would have meant, namely, trebling the size of the Long Pond, and presumably erecting a bridge, altogether a Capability Brown scheme on a fairly large scale. As it was, lacking the vision and energy Mr Churchill, I had to leave my pond as a pond, which incidentally it has always been’.

The are several interesting buildings in the grounds of Firle Place that are worthy of note. The Dairy, positioned a few metres to the south west of the house, is recorded to have been moved from an earlier garden to the north and was used to make and store cheese. The Granary was built on mushroom shaped stumps called sale stones in order to protect stored grain from rodents. The grain was milled on site in machinery that still exists there, (It is currently being used as a sound recording studio). The Gas House, which is currently used to produce Lady Gage’s balms, ointment and soaps was designed to produce gas from coke coal. This gas was piped through to the gas lamps in Firle Place before electrical lamps were installed in the early 20th century.

The Stables and Riding School

The Riding School and Stables were built in the early 1800’s and are still used to house and train horses to this very day. Since 2010 the riding school has been converted into a wedding venue every summer. Given the success of this venture plans are now underway to turn it into a permanent entertainment space, suitable for conferences, weddings and parties all year round.

Fire Place is adjacent to an historic and unusually large walled garden. One of the first specimens of the Greengage plum still exists there, amongst other prolific plum, pear, apple, and other fruit trees. The walls of the garden were heated in order to produce fruit year round. In the 19th century the walled garden produced much of the fruit and vegetables for the Gage family and inhabitants of Firle village. At present it still produces an abundance of fruit every year and recently has become home to Lady Gage’s herb garden, created in 2010. The Herb Garden produces balms, creams and ointments which are available to purchase in the Tea Room at Firle Place. 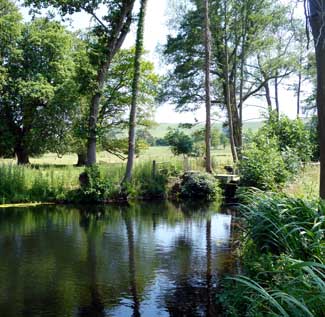 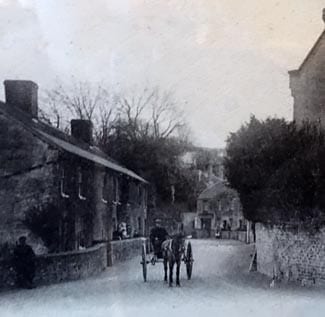 Firle Village – A Ribbon of Life 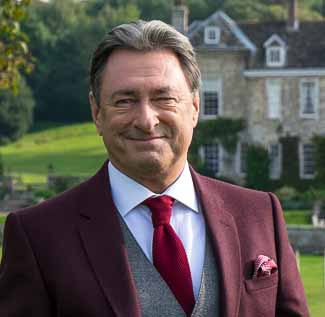 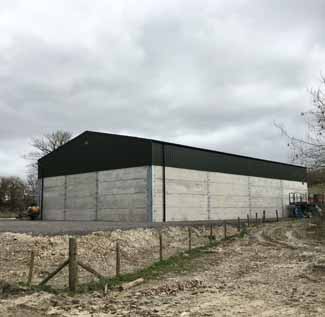