Firle Place contains one of the most significant and historic private collections of old master paintings, furniture and porcelain in Southern England and the only place in the country where a section of the celebrated Cowper collection may be viewed.

An inventory attached to Sir John Gage’s  (1479-1556) will attests that his Tudor house was richly furnished. Only his book of hours remains at Firle today.

When Firle was converted to a Georgian house, it was gradually filled with an accumulation of works of art from Highmeadow in Gloucestershire, and the family London townhouse at 16 Arlington Street. Pictures were also commissioned; the 2nd Viscount Gage (1718-1791) was painted by Thomas Gainsborough in 1777. The 3rd Viscount (1761-1808) and his wife Susannah refurbished the interiors at Firle and commissioned Gillows furniture, while photographs during the tenure of the 5th Viscount (1854-1912) and his wife Leila show the Great Hall and Long Gallery with Victorian interiors.

The 6th Viscount (1895-1982) took an interest in the collection and bought back family pictures. The Knightly inheritance from Fawsley Hall, Northamptonshire came to Firle in 1938.  Significantly, through his marriage to Imogen Grenfell in 1931, a section of the Cowper collection from Panshanger House, Hertfordshire came upon the death of her mother, Lady Ettie Desborough (1867-1952).

This was considered one of the foremost collections in Britain in part because of its supreme quality and that it had remained almost  intact for over 350 years, under the auspices of seven Earls Cowper. The most celebrated collector was the 3rd Earl Cowper (1738-1789), who lived in Florence for 30 years. The 3rd Earl was also left Dutch paintings from his grandfather, the Earl of Grantham (ca. 1672-1754), including the group portrait of Count John of Nassau and his family, now hanging in the Great Hall. The Lamb family inheritance, such as the “Panshanger Cabinets” by Thomas Chippendale, and the Sèvres Melbourne dessert service, together with Lucas heirlooms from Wrest Park, Bedfordshire were inherited by the 7th Earl. The Grenfell collection from Taplow Court, Berkshire arrived in 1954, included the Philips de Koninck landscape, formerly in the collection of Horace Walpole.  In 1999 the 8th Viscount Gage arranged the long-term loan of further works of art from the Cowper collection, from the heirs of Lady Salmond, Imogen’s sister.

The Treasures of Firle Place
PREV
NEXT
Explore

The Art at Firle Place

The celebrated works of art now housed at Firle Place present a pertinent insight into British collecting, where this ethos is well exemplified through the unity provided by the taste of successive generations of collectors, familial relationships and primogeniture.

Among the collections associated with Firle is a significant archive of muniments and manorial rolls deposited at the East Sussex  Record Office, made the more remarkable by elements of the Estate having been in the hands of one family for over half a millennium.  The records of the manor of Alciston, with only two owners – the Benedictine monks of Battle Abbey and the Gage family – since 1066, are merely the outstanding of many examples. The manor of Alciston had been given as a reward to Sir John Gage KG (1479-1556) (JG2) by Henry VIII at the time of his dissolution of the monasteries.

When Firle was converted from a Tudor to a Georgian house, doubtless there was a clearance of old contents; when rebuilding and the art of decoration was beginning to reach its zenith in the 18th century, not a great deal of respect would have been paid to preserving the past. Today, all that remains from the Tudor and Elizabethan period are a few family portraits and Sir John Gage’s Book of Hours. Also thirteen tiles in the Library fireplace (and a further nine in store), of what must have once been the most striking and up-to-date works of mural art (or a pavement) in Tudor England. They were made in Antwerp in 1546 and represent subjects from the Old Testament.

Furniture, paintings and quite possibly the panels in the Palladian Drawing Room appear to have made their way to Firle during the Georgian era, from Highmeadow in Gloucestershire, and the family London townhouse at 16 Arlington Street. An important and rare pair of gilded fox side tables in the Palladian Drawing Room, dating from ca. 1740, are similar to another pair without gilt decoration at Stourhead; equally exciting is a side table in the Little Hall, from the same date, with its original matt and burnished gilding; both most likely came from Arlington Street. The Robert Adam period chandelier, attributed to William Parker (fl. 1756-1803) is brilliantly hung in the Little Hall, so that the rays of the morning sun shine through the crystals, throw rainbows around the room. The 3rd Viscount Gage (1761-1808) refurbished the interiors at Firle, and commissioned furniture from Gillows such as the set of green ’Gothick’ stools, originally made for the dairy on the front lawn, built for his wife, Susannah. They also acquired furniture for their London home, an invoice dated 1792 exists for £46 4s 0d from Holmes and Griffin of Whitcomb Street for an ‘Etruscan’ style sedan chair, bearing the monogram and coronet of Susannah, which was kept in the front hall in 16 Arlington Street, and today stands in the Great Hall at Firle. Porters’ receipts show that Susannah was regularly carried to visit her mother in law Margaret Gage (1734-1824), wife of the General, who by then was widowed and living in Albermarle Street. Two late 17th century Beauvais tapestries with Commedia dell’Arte figures hanging in the Great Hall were a wedding present to the 6th Viscount Gage, given by the parents of his wife Imogen’s Desborough in 1931.

The Knightley inheritance, mostly family portraits, from Fawsley Hall, Northamptonshire came to Firle in 1938, through Selina Knightley (1816-1886), the 6th Viscount’s grandmother. The portraits relating to Lady Penelope D’arcy (ca. 1594-1661) hung at the upper staircase level of the Little Hall were purchased from the Hengrave Hall, Suffolk sale in 1952.

Many of the star works of art at Firle were inherited between 1945 and 1952 by Imogen (1905-1969), wife of the 6th Viscount Gage (1895-1982), who was a Grenfell from Taplow Court , Berkshire and whose ancestors included the Cowpers, whose seat was at Panshanger House, Hertfordshire, and the Melbournes whose homes included Melbourne House, Piccadilly (now Albany), Brocket Hall, Hertfordshire, and Melbourne Hall in Derbyshire. A selection of Italian paintings purchased by the celebrated collector, the 3rd Earl Cowper (1738-1789) are hung in the Upstairs Drawing Room, while his successor and son, the 5th Earl Cowper’s (1769-1830) taste was more inclined towards Dutch and Flemish paintings, exemplified by the Salomon van Ruysdael (1600-1670) wooded river landscape, signed and dated 1644, hanging in the Dining Room. The 5th Earl also purchased the ‘Coastal Scene with Fishermen’, by Salvator Rosa hanging in the upstairs Long Gallery. A large canvas of ‘The Wine Harvest’ by David Teniers the Younger (1610-1690), was acquired by the lst Viscount Melbourne (1745-1828) and hung at Brocket Hall, today it takes pride of place over the mantelpiece in the Long Gallery. Johann Zoffany’s (1733-1810) portraits of the 3rd Earl Cowper, shown standing in the grounds of Cowper’s Villa Palmiere, near Fiesole, and the companion portrait of his wife, Anne Gore (ca. 1758-1826) painted in Florence in 1774, a year before their marriage, dressed as a Savoyarde,  hang at the end of the room. Perhaps the most important pieces of French furniture in the Long Gallery are a pair of commodes, of a style known as commode en tombeau, by Pierre Daneau (b.1673-), confirmed by two paper labels hidden behind the drawers signed ‘Daneau a Paris 1733’, an extremely rare example of an identified piece of French furniture before the introduction of the compulsory stamp in 1743.

The ‘Panshanger Cabinets’ in the Upstairs Drawing Room, ranking among the few named pieces of Chippendale furniture and veneered in cherry wood, were originally commissioned by the lst Viscount Melbourne as bookcases for Melbourne House in Piccadilly. Lord Melbourne’s Lexicons, in Greek and Latin, signed and dated by him, were discovered during conservation, when the side doors were unlocked. Also from Melbourne House, and subsequently Brocket Hall are a pair of rare Sèvres  Vases, on ormolu mounts, with a  bleu de roi gound, and unusual Chinoiserie decorated panels. Painted by Charles Nicholas Dodin (1734-1803), they were intended as flower vases, and would have been planted with luxurious tulips during the winter, and held cut flowers during the remaining months. A pair of vase hollandois, apparently from the same garniture are how at the Rijksmuseum, in Amsterdam.  And another rarity is a single vase hollandois nouveau with a pink ‘marbled’ ground, also intended as a flower vase, the pair to which is in the Forsyth Wickes collection, at the Museum of Fine Arts, Boston. 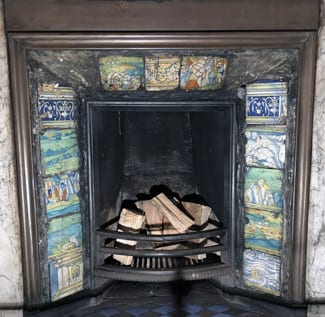 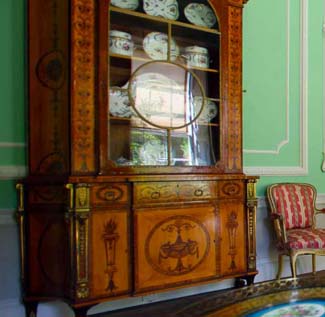 The Melbourne Cabinets in Context 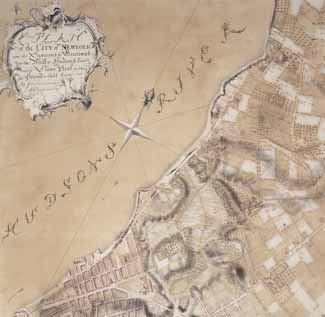 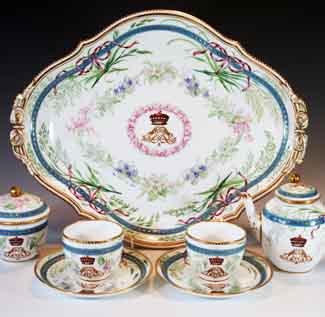